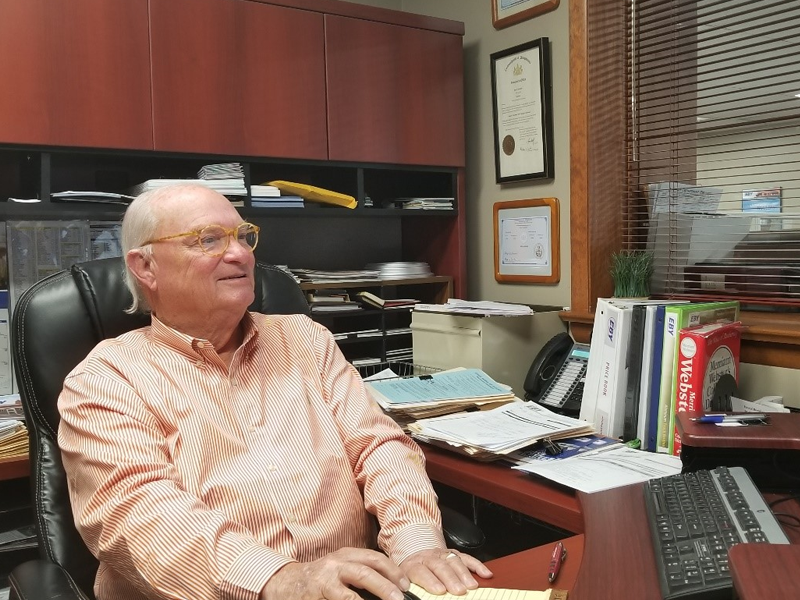 M.H. EBY, a national leader in the manufacturing of aluminum livestock and horse trailers, is announcing the retirement of long-time employee Darryl Breniser, VP of Sales & Marketing since 1983.

“It’s not every day that a person like Darryl comes along, and after 35 years, it’s hard to imagine not having him around every day,” said Travis Eby, President. “Simply put, without Darryl, we would not be where we are today as a company.”

Darryl’s journey to M.H. EBY is one that paved the way to his success where he grew up enjoying the combination of both playing sports and riding horses. His grandfather always had horses around the farm in Monterey (outside of Leola, PA), where he enjoyed trail-riding with his cousins. He was also a varsity letterman in wrestling and football at Conestoga Valley High School. After graduating, he spent summers showing the saddlebred he purchased from funds earned working full-time night shifts at Warner Lambert in Lititz, PA.

Darryl went on to attend Robert Morris Junior College in Pittsburgh, and later taking courses at York College, Franklin & Marshall, and Penn State. These courses and several mentors during his early employment years were an integral part in assisting him to reach his career goals.

After college, he started working at a local bank, and soon found that was not his calling. After two years at the bank, he went on to work for Howmet Aluminum in Lancaster. He was employed there for 4 years as part of their inside sales team. Then, an opportunity emerged to get outside sales experience with American Steel and Aluminum where he met Menno Eby, for the first time (not knowing then that Menno would be his future boss). During the same time, Menno began converting his wood cattle bodies to aluminum, which was a break-through in the livestock trailer industry at the time. The two soon got to know each other when Darryl went to Cressona Aluminum and worked in sales, supplying M.H. EBY with aluminum extrusions. For Darryl, leaving Cressona for EBY was difficult given they were on pace to become the largest independent aluminum extruder in the U.S. at the time, but the bond and opportunity he developed with Menno was too good to pass up. His first day at EBY was Dec. 5th, 1983.

“Those early years after Menno made the conversion to aluminum, I really saw a bright future here,” Darryl said. “Menno was in the process of constructing a new building to expand and capture a larger share of the gooseneck trailer business…and grow we did - along with adding horse trailers, livestock semi-trailers, and truck bodies to our portfolio. It was simply amazing. We were a real machine – just like we are today!”

Soon after Darryl joined M.H. EBY, his abilities to identify market niches where EBY could succeed and grow became evident, and many have continued to this day. EBY models such as Wrangler, Trans Pork and the Pacesetter horse trailer are market leading products that were born on Darryl’s desk. Darryl has sold horse trailers to equestrian owners in Australia, Dubai, Europe, and all over the U.S. and Canada. EBY Horse Trailers regularly transport the best race horses in the world, including Belmont favorite and Triple Crown hopeful, Justify.

His favorite thing about EBY is the fact that it’s a family owned business, who truly care about their employees. “You feel like a part of a family here, and that admiration makes you want to work hard and represent the company well. One of my firm beliefs is that good luck is the result of hard work.”

Darryl’s charisma and integrity rubbed off on current company President, Travis Eby, at an early age as well. “As a mentor, Darryl invested his time in my development and many others as business people and representatives of this company.  As a sales and marketing manager, he helped create and cultivate our commitment to innovation.  As Menno’s right-hand man, and member of the executive committee, Darryl’s thoughtful guidance and business-savvy skills helped guide the company through great times and a few tough ones. His impact on this company will forever be etched in stone.”

Darryl and his wife Beverly are planning some down time during retirement both locally in Lancaster and at their beach house located in Avalon, NJ. He and Beverly have been married for 45 years and have considered themselves both fulfilled in their passions – Beverly served as a principal in the Conestoga Valley School District for 30 years. Darryl’s last day with the company will be Monday, June 18th.

At EBY, we've been making the best aluminum trailers & truck bodies in the USA for more than 85 years.

Our history of trailer innovation pays off for you every day.
Shop Now

Visit an EBY Dealer or Distributor

Or talk to an eby expert now

Let us connect you with your closest Dealer, Distributor, or EBY Sales & Service Center.